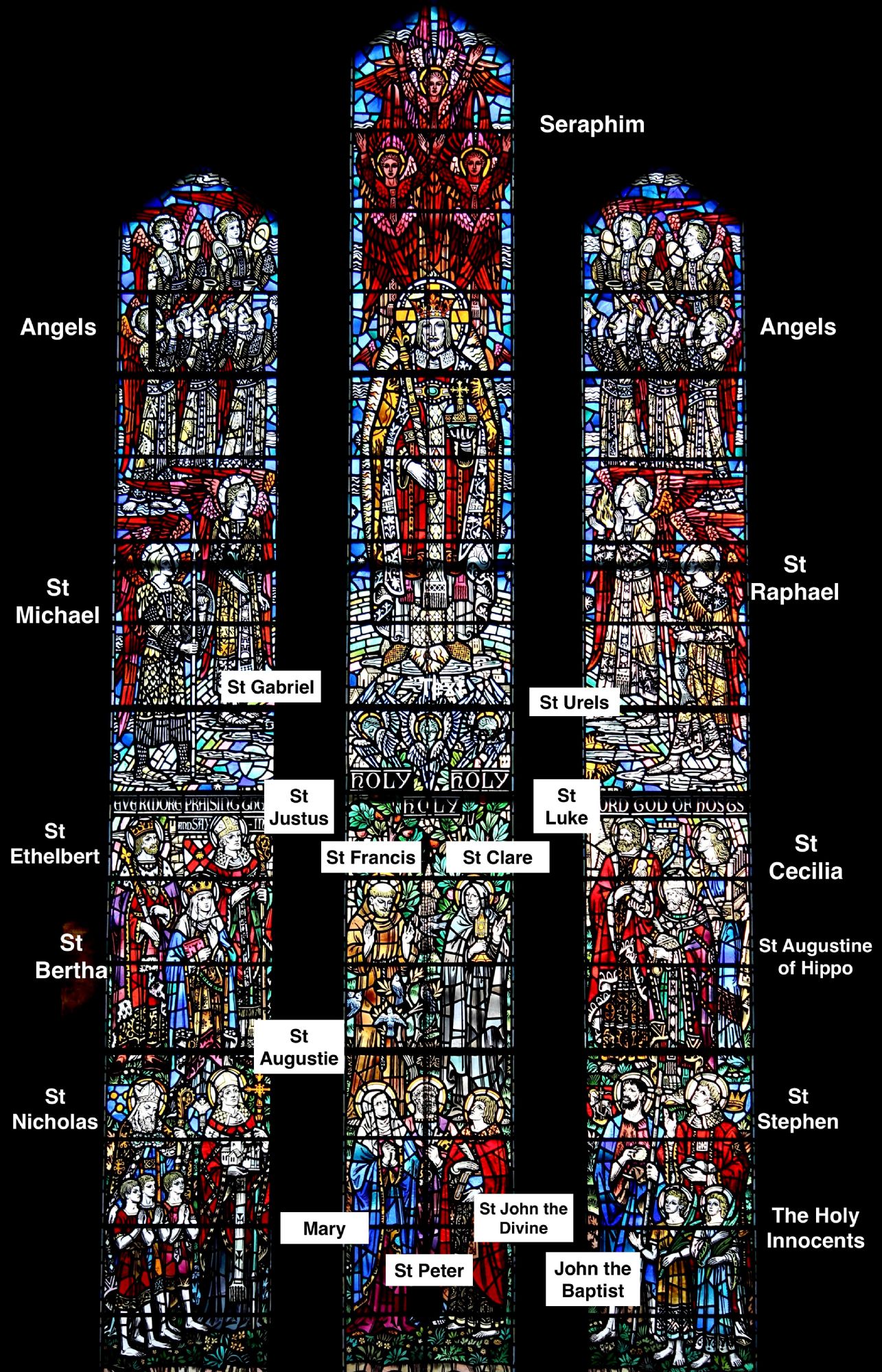 Angels. Celestial beings who act as intermediaries between Heaven and humanity. protect and guide humans beings and carry out God's tasks.

The four depicted in our window are:-
Michael, defender of the church and chief opponent of Satan, shown with his spear and shield.
Gabriel, the messenger, who appeared to Daniel, Zacharias, (Father of John the Baptist), and the Blessed Virgin Mary. (Not unsurprisingly he is the patron saint of postal and telecoms workers).
Uriel, who shines the light of God's truth into the darkness of doubt and confusion.
Raphael, who heals people's minds, spirits and bodies.

King Ethelbert. (552-616)
The pagan King of Kent who made a drastic marriage with Bertha to build an alliance with her father Charibert King of the Franks. He continued to worship Odin after his marriage until his baptism in 597, but gave his wife the old Roman church in Canterbury which she rebuilt and dedicated to Saint Martin's of tours (her home town). It is now the oldest parish church in continuous use in the English-speaking world.

Queen Bertha.
(564-612) A Christian Frankish princess sent by her father to make a dynastic marriage with King Ethelbert of Kent. She agreed to go on condition that her chaplain Bishop Luidhard came with her. Her presence probably influenced Pope Gregory to  send St Augustine  to England.

St Augustine of Canterbury
Was prior of a Benedictine monastery in Rome when selected in 595 by Pope Gregory to convert the English. He was reluctant to go and nearly turned back during the arduous journey but finally arrived in Thanet in 597. He converted King Ethelbert, who gave him land in Canterbury for St Augustin's Abbey and Canterbury cathedral, and he became the first Archbishop of Canterbury

St. Justus.
Was sent from Italy to assist St Augustus in 601 and became the first bishop of our Rochester diocese in 604.In 624 he became the fourth Archbishop of Canterbury.

St. Francis of Assisi.
Francis was born the son of a rich cloth merchant in Assisi, Italy, in about 1180 and lived an indulged and highly social life, which, in those days, included being trained in fighting with weapons. He was taken prisoner during a bloody battle and held for ransom in miserable conditions. Released after a year, suffering from what we now call Post Traumatic Stress Disorder, he devoted his life to God and embraced poverty, preaching in the villages and even to animals and birds. Thousands of followers, known as Franciscan friars, joined him. He died aged just 44 and was canonised only two years later.

St. Clare of Assisi.
Clare was born in Assisi to wealthy parents and dedicated herself to prayer. Having herd St Francis preach she asked him to help her live according to the Gospel and he arranged for her to enter a nunnery. Her sister and other ladies joined them and they became known as “The poor ladies of San Damiano”, living close to that church, engaging in manual labour and prayers and keeping silence. Devoted to St Francis, she cared for him as he grew old and, after his death continued to lead “The Poor Clares”. When an army attacked Assisi Clare took the Blessed Sacrament to the city wall, placed it where the soldiers could see it and begged God to save the Sisters. A loud voice “I will always keep them in my care” was heard and a blinding light frightened off the invading army. In our window she is depicted holding the Blessed Sacrament.

St. Luke.
Luke, author of St Luke’s Gospel and The Acts of the Apostles, is believed to have been a Greek gentile physician who joined St Paul in about 51AD and travelled widely with him. Luke’s is the Gospel of the poor and social justice; He writes “Blessed are the poor” instead of the oft quoted “Blessed are the poor in spirit”, gave us Mary’s The Magnificat and the Prodigal Son.

St. Augustine of Hippo.
Born in what is now Algeria in 354AD, Augustine was a writer, theologian and perhaps the most significant Christian thinker after St. Paul.

St. Cecilia.
Cecilia, forced by her parents to marry a pagan against her will, spent the wedding service singing to herself which is why she later became the patron saint of musicians. She converted her husband to Christianity and was martyred with him and her brother-in-law in  about 230AD. In our window she is depicted holding a pipe organ.

St. Nicholas.
Nicholas was born in what is now Southern Turkey, became Bishop of Myra and attended the Council of Nicea, the first ecumenical council of the Christian church held in 325AD during which formulated Nicene Creed, still said today “We believe in one God, the Father, the Almighty, maker of heaven and earth…….” He was renowned for his generosity to those in need, his love for children and his concern for sailors and is known to us all as “FATHER CHRISTMAS”

St. Peter.
Simon the fisherman from Bethsaida became one of Christ’s first disciples, named by him “Petros” or “Rock”. And upon this rock the church will be built. Peter lead the disciples after the death of Christ and traditionally established the Church of Rome.

St. John the Divine.
Author of the Book of Revelation, the apocalyptic text forming the final book of the New testament

St. John the Baptist.
The wandering prophet who foretold the coming of Jesus and subsequently baptised him, is revered not only by Christians but also by Muslims. He was sentenced to death by Herod Antipas for condemning Herod’s divorce of his wife to marry his half-brother’s wife. In our window he stands next to the Holy Innocents, the children massacred in Bethlehem by Herod the great in his attempt to kill the infant Jesus.

St. Stephen.
A deacon in the early church in Jerusalem, Stephen’s preaching upset the synagogues and he was tried for blasphemy, found guilty and stoned to death in 34AD becoming the first martyr of the Christian church. He is the patron saint of deacons and stonemasons.